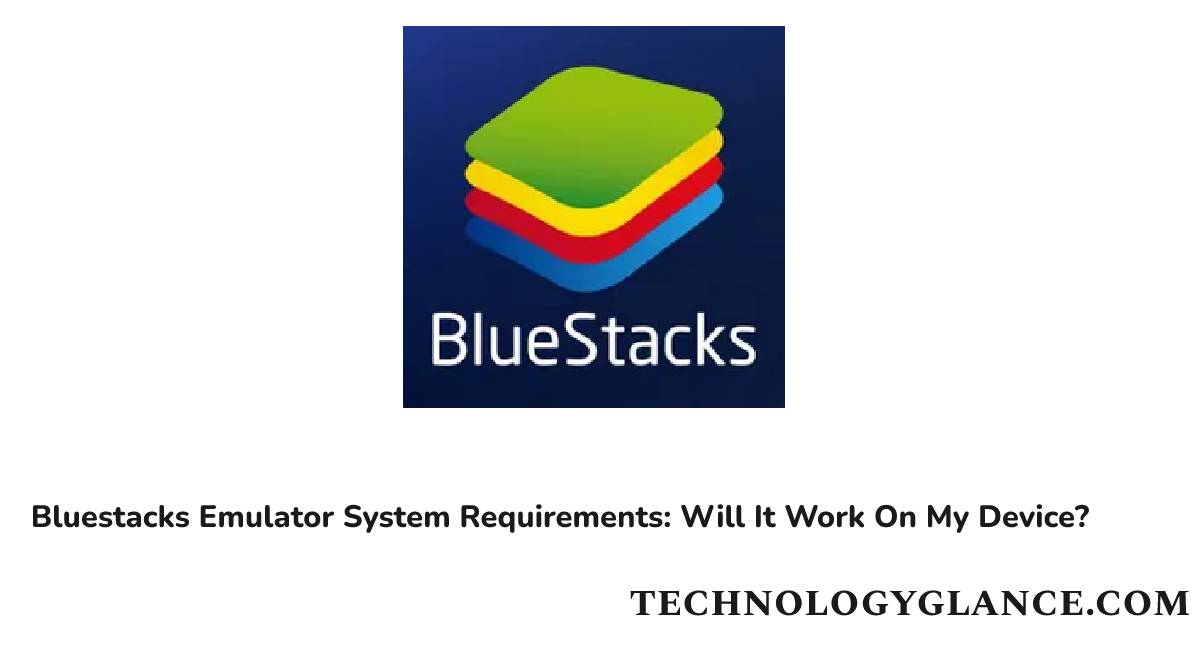 The emulator is hardware or software that enables a computer system to behave like another one. This technology is used when native support is not available in particular hardware or software configurations. Emulations often help users save their time and money in configuring their native hardware/software.

Here are the minimum and recommended system requirements for Bluestacks 5 in Windows systems:

Here are the minimum and recommender system requirements for Bluestacks in the macOS system:

Protips to speed up BlueStacks performance

How To Enable Virtualization In Windows 10?

Virtualization is a technology that lets us create a virtual version of various computer resources such as virtual computer hardware platforms, storage devices, and other types of software that are not natively supported by the host system. Virtualization is also the foundation of cloud computing.

Bluestacks Emulator by default doesn’t require virtualization to be enabled. The application can still run the computer without virtualization. But the application will only be able to utilize a single CPU core among multiple cores which will result in a significant performance impact. In the latest computers, virtualization is enabled by default. So you don’t really have to change anything.

How To Enable Virtualization in Intel System

How To Enable Virtualization in AMD System

Here are the ways to enable virtualization in an AMD-based system:

How To Enable Virtualization In macOS?

The virtualization feature is enabled by default in macOS. But in some Mac models, the feature might be disabled in firmware. However, there is a way to check if your system supports virtualization or not.

Advantages Of Enabling Virtualization For Bluestacks

Bluestacks emulator can run on any system which fulfills minimum system requirements and virtualization feature disabled. But you will notice a significant performance impact if you use the application without the feature enabled. Here are some advantages of enabling virtualization for Bluestacks:

Bluestacks 5 is the latest iteration of Bluestacks emulating software. Bluestacks 5 is more efficient and consumes significantly less CPU power as compared to Bluestacks 4. It uses 40% less RAM than its predecessor. It can run multiple instances in eco mode to reduce CPU usage by nearly 87% and GPU usage by 97%. Here I have presented the method to download and install Bluestacks 5.

This is one of the most used Android emulators other than Bluestacks. It has got tons of features. The emulator has a great number of optimizations for gameplay. The emulator has many features dedicated to developers. So if you are an Android developer, this emulator is a very good platform to test your app.
Official Website: https://www.memuplay.com/

Gameloop is another great Android emulator which is developed for gamers seeking to play tons of Android games on PC. Earlier, the emulator was called Gaming Buddy, which was developed by Tencent games exclusively to emulate PUBG mobile, but now Tencent has brought support for a large number of other Android games as well.
Official Website: https://www.gameloop.com/

Nox player is another popular Android emulator used by millions of users all around the world. The emulator has a plethora of features, including gameplay optimizations, and controller compatibility. It is based on Android Nougat 7.0 and has adapted Google’s Material UI.
Official Website: https://www.bignox.com/

Andy Android Emulator is a lightweight emulator, and it can run all Android applications. There is an ability where you can play your favorite games using Playstation and Xbox controllers. You can also sideload other applications which are not available in Play Store and run them using this emulator. But note that the application has not been updated since 2019. So you have to be cautious about possible security risks by using an older version.
Official Website: https://www.andyroid.net/

Bluestacks Emulator is one of the best android emulators that has been used by millions of users all around the globe. It runs smoothly in most modern systems, but there are many users who do not use the latest available computers. The users using the low-end systems will experience lag while using the Bluestacks emulator. For those users, there are other alternatives that are lightweight and run smoothly, such as Andy Android Emulator. You can also set Bluestacks performance mode to “High Performance” to get the most out of your hardware. We also recommend not running any background tasks.

There are various versions of Bluestacks Emulator latest one being version 5. Version 5 is a highly optimized version of Bluestaacks. The focus has been on performance improvement. If you have been using version 4 of Bluestacks with lower-end hardware, you will experience a noticeable improvement while using version 5. Bluestacks version 5 uses nearly 40% less RAM as compared to version 4. There is a new feature called Eco mode, where you can reduce CPU usage by 87% and GPU usage by 97%. You can also create multiple instances of the application in a more efficient way.

Is Bluestacks Safe From Virus?

Bluestacks is totally safe to use from a security perspective. Some of the anti-malware applications like Avast might flag Bluestacks as a threat, but those are false positives. So, you don’t have to worry about Bluestacks infecting your computer. You have to make sure that you download the installer only from the official source and not from other third-party websites. Bluestacks will not guarantee the safety of the emulator if you download using third-party websites.

Does Bluestacks slow down my system performance?

How much RAM is required by Bluestacks Emulator?

It is recommended to have at least 8GB of RAM for a smooth experience. If you have additional RAM, you will be able to run other applications as well alongside Bluestacks.

How to check the Android version of Bluestacks Emulator?

Yes. You can run separately downloaded APK files in Bluestacks Emulator. You can install any APK files by going to the side toolbar and selecting APK files. It will start to install the app immediately.