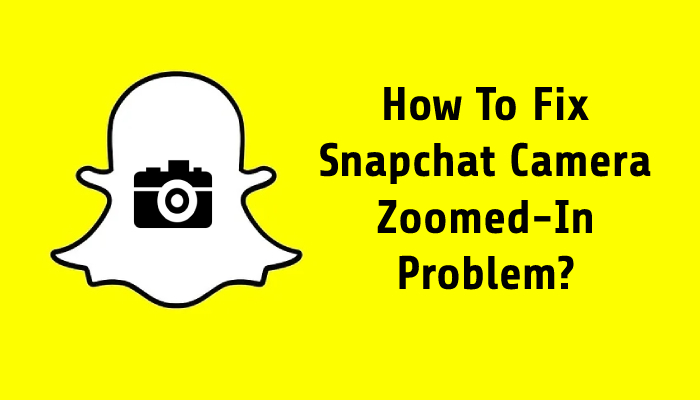 The Snapchat app specializes in two things the present generation loves doing the most: taking pictures and chatting. One of the most popular messaging platforms allows users to chat through pictures (called Snaps) that disappear in a few seconds. We must agree that the app is adored mostly because of its camera and unique filters. It allows you to try new filters with your friends to enhance your selfie.

However, we also know that an app with so many users faces major glitches from time to time. For example, the Snapchat camera zoomed-in problem is an ongoing problem faced by many Snap-chatters. The problem is categorized by the camera zooming in more than required while using both front and rear cameras.

The main reasons for this might be device or app issues. The basic solution is to reload your app, make sure you are using the latest version, check your internet connection, clear your app lens cache, update the security patch for your device, and many more.

This article will detail what causes the Snapchat camera zoomed-in problem and how we can easily fix it. If you want to get rid of the problem to resume taking extraordinary pictures, it is certainly worth the read.

The best way to find a solution to a problem is to find its cause. There could be various reasons for the Snapchat camera zoomed-in problem. Snapchat has billions of users, so it is fair to have some glitches along the way. The camera zoom-in issue is an old issue that Snapchat support is fighting. The main reasons why the problem occurs in some devices are:

Sometimes, problems in your app can occur not because of the app but the device itself. For example, your Snapchat camera zoomed-in problem could be because of an internal issue with your device.

Your device’s camera might not be functioning properly, or your phone settings might have been tampered with, causing the camera issue on your Snapchat app.

Hence, the internal issue of your device may be one of the reasons for your Snapchat camera malfunction.

In most cases, the problem for any app feature malfunctioning lies within the app itself. If your device settings seem to be working fine, some internal bug in your Snapchat may be the cause.

The Snapchat camera zoomed-in problem may occur when installing a third-party application for Snapchat features like filters. This action may attract bugs causing malfunctioning of your Snapchat app.

Another reason Snapchat shows the camera zoomed-in issue is due to the full Snapchat cache. If the Snapchat cache or data is full, it cannot store more of it which causes various app malfunctions.

Similarly, a Snapchat camera zoomed-in malfunction may occur because you use an unsupportive or old version or your app is not updated. So there are various reasons why your app features may sometime malfunction. But there are solutions to every problem, which we will talk about next.

How To Fix The Snapchat Camera Zoomed-In Problem?

Since most users use Snapchat for its interesting camera features, problems like camera zoom in make the users frustrated and ruin the overall experience.

So, this piece will talk about some ideas to solve the Snapchat camera zoomed-in problem that occurs in both cameras- front and rear. A stable internet connection secures the smooth functioning of any social media app. For example, if you have a poor connection while taking pictures on Snapchat, it can create a camera issue.

Therefore, you must check your Wi-Fi connection to solve the Snapchat camera zoomed-in problem. Then, you can restart your router or contact your ISP to resolve the connection problem.

Switching to mobile data may help you resolve your problem ASAP.

Another way to fix the issue is to restart the app on your device. Sometimes, Snapchat will not properly load on the first try. So, restarting will help.

You can close the app entirely, even recently, and open it again. That way, the app server may function properly, which may help fix your Snapchat camera zoomed-in problem.

In most cases, an outdated version shows many issues in the app. For example, the camera issue may be that your app is not updated.

Hence, it is best to download the latest version of the Snapchat app and see if the problem is fixed. Furthermore, it is important to update the apps you use because every update brings improved functioning, new features, and a better security patch.

To update your app, you can go to Play Store (on Android) or App Store (on iOS), click on your profile, and check if Update is available. If yes, click on update, and it will provide you with an updated version of the app. As we mentioned earlier, if the Snapchat app is full of data or cache, it will create problems in your app, making it slow. If you have an unnecessary cache or data store, it will trouble you with camera zoom-in or zoom-out problems.

Here is a step-wise guide on how to clear Snapchat Lens cache data to fix the Snapchat camera zoomed in problem:

Step 1: Open the Snapchat app, and you can directly see the Camera page
Step 2: Tap on the Profile Icon located at the top left corner of your screen
Step 3: After that, tap on the Settings, i.e., Gear Icon, to access the Settings.
Step 4: Then, tap on Account Actions and Clear Cache
Step 5: Finally, tap on Continue to clear all your cache data.

Update The Security Patch For Mobile

An outdated security patch might be causing the Snapchat camera zoomed-in problem on your device. But do not worry; updating the security patch is the easy fix to this problem.

Here’s how you can do it:

This should resolve your camera issue.

Sometimes, if nothing works, uninstalling and reinstalling your app clears all bugs and unnecessary data on your app. Corrupted data hampers the performance of any app, causing malfunctions like the camera issue on Snapchat. In such a case, deleting the app and re-installing it may resolve your camera issue.

That won’t be the case if you are worried that deleting the app will also remove your login credentials, previous data, or Snap streak. Instead, it will only remove your chat messages and nothing else.

To uninstall the app,

Long press on the app for a second or two until the uninstall option.
Then, tap on the option, and it will uninstall your app.
Then to reinstall the app, go to Plays Store or Apple Store, search for Snapchat in the search bar and then Tap on the Install button. If any, restarting your device will solve your Snapchat problem and other issues.

When everything fails, you can approach the Snapchat app itself to troubleshoot your issue. In addition, Snapchat has Snapchat Customer Support that helps you solve any issue on the app.

The app is not responsible for the Snapchat camera zoomed-in problem. However, the support team will render proper advice on how you may solve it.

How To Fix Blurry Snaps?

We need to know that the Snapchat camera issue is not the malfunctioning of the app but your device. If you get shaky snaps, your device might have some issues.

So, to fix the blurry Snaps, first, check if there is an issue with your phone camera. Then, check its vision to see if the camera seems to be working fine.

Sometimes, dust stored in your phone’s camera lens can also contribute to blurry Snaps. Make sure you clean or change your outer camera glass. You can do that from your local mobile shop.

Hence, you can fix blurry Snaps once you fix all the camera issues on your device.

Why Is New Snapchat Camera Feature Not Available Yet?

An outdated app will not show all the new features it adds. If you can’t use the new Snapchat camera feature, the possible reasons may be:

To use the new Snapchat camera feature, update your app to new features timely.

Why Does Snapchat Camera Look Poor?

Snapchat Camera looks poor because the app’s main feature is chatting messages and not the camera. So, it uses a decent camera setting.

All apps have their version that differs from the device camera. Hence, camera settings vary from app to app to reduce the size and boost performance.

I have tried to enlist and answer some relevant frequently asked questions related to Snapchat Camera on the Internet.

-Open Accessibility and tap on the Vision option
-Then, tap on magnificent gestures and enable Zoom.

How To Change Snapchat Camera Settings?

To change the Snapchat camera settings:

-Go to device settings and tap on the Camera option,
-Then, allow the Snapchat app as required.

All or most Snapchat camera issues have the same fixes. So, if your Snapchat won’t open the camera, try one of the above methods for an easy fix.

Snapchat is a unique app that helps you stay connected with friends with less effort. The camera features make socializing 110% more fun. So, any camera issue like the Snapchat camera zoomed-in problem would be a huge bummer for any user.

Keeping that in mind, the article has a detailed list of fixes that you can apply to fix the issue. You need to keep calm and try the methods listed above. One of them will certainly help resolve your issue.

Feel free to leave comments below if you have any queries or suggestions. Till then, Happy Snapping!