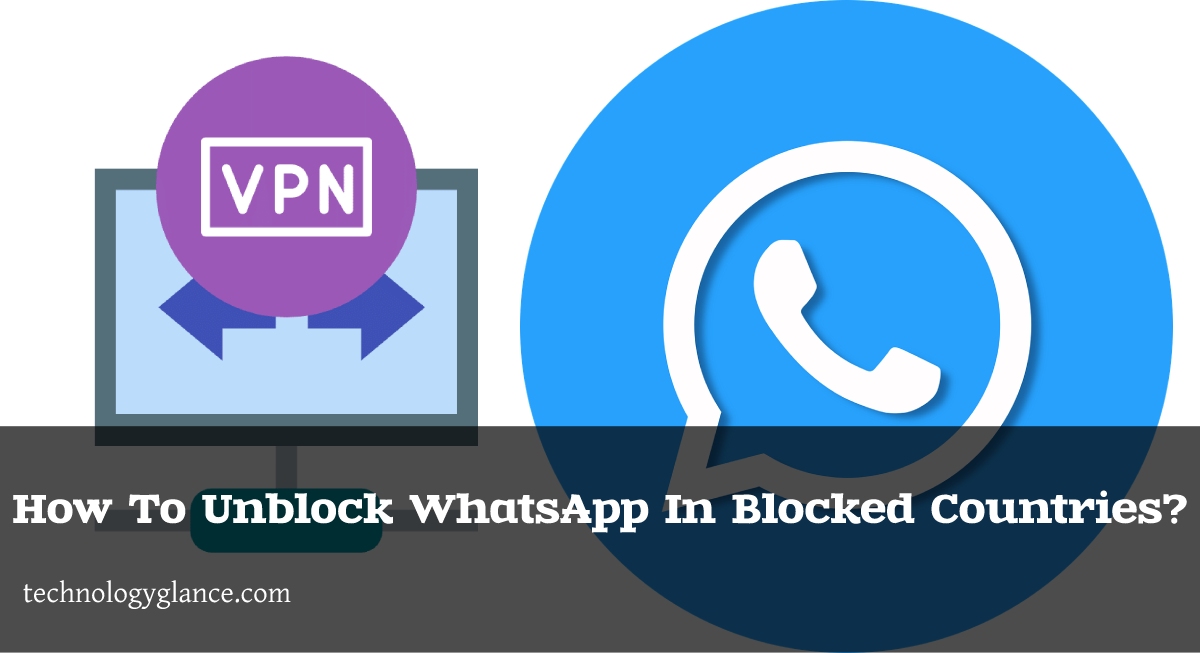 WhatsApp is the world’s most popular messaging app. With around 2 billion active users worldwide, WhatsApp has surpassed the list of one of the most used messaging apps. Its no advertisements policy and its devotion to user privacy have helped it dominate the chat market since its launch in 2014. But, due to the end-to-end encryption feature, many countries have blocked WhatsApp. So, how to unblock WhatsApp in blocked countries?

Most countries are strengthening their internet censorship for which they are hunting messaging features of any app. Likewise, some countries block Voice over Internet Protocol (VoIP) services such as WhatsApp due to security issues. The best way to get around such restrictions is by using a Virtual Private Network (VPN). VPN software allows you to deflect your Internet traffic through a server in another location. That way, you can unblock WhatsApp in blocked countries.

This article will guide you through why some regimes block WhatsApp and how to unblock WhatsApp from blocked countries using VPN services.

Which Countries Have Blocked WhatsApp?

Primarily, the countries that want to censor open and free communication have banned WhatsApp.

When we think of countries banning certain apps, China first comes to mind. In China, in July 2017, blocked certain features of WhatsApp, which included file sharing, video, and voice chats. However, in 2017, the Chinese government banned WhatsApp, which is still intact.

Besides China, other countries have blocked WhatsApp either temporarily or permanently. For example, North Korea, United Arab Emirates (UAE), Iran, Qatar, and Syria have banned WhatsApp permanently. Moreover, Saudi Arabia limited some of the app features in the past but lifted the ban in 2016. In addition, Brazil, Egypt, Morocco, Uganda, Zimbabwe, etc., had temporarily banned WhatsApp.

Why Have They Banned WhatsApp?

Aren’t you curious why certain countries would deprive their citizens of popular messaging apps like WhatsApp? The reasons include free and open communication mechanisms. Since WhatsApp provides end-to-end encryption, your data cannot be deciphered, which the authorities do not enjoy.

United Arab Emirates (UAE) is another country that has blocked WhatsApp. This is because UAE wants 80 percent of its population to sign up with local fee-based services like Etisalat and Du. For this reason, they have blocked VoIP services like WhatsApp.

Similarly, North Korea does not like anything encrypted, so WhatsApp has been illegal in North Korea since 2018.

The reason why Iran has blocked WhatsApp is slightly different. The app’s “Zionist connection”-antisemitic sentiment towards Mark Zuckerberg.

Likewise, WhatsApp is blocked in Qatar because it doesn’t fall on the list of licensed VoIP. You can use WhatsApp for messaging in Qatar. The calls are, however, jammed.

Applications that encrypt traffic internet censorship are locked down in Syria, so WhatsApp is a no-no.

Brazil blocked WhatsApp in 2015 and 2016 because the government had a dispute with the WhatsApp owner on handing over data to investigate cybercrimes.

Therefore, in certain countries, VoIP services like free, worldwide voice and video calling services are blocked by telecommunications companies because it impacts their revenue.

How To Unblock WhatsApp In Blocked Countries?

If WhatsApp is blocked in your country or you are traveling to a country where the app is blocked, you cannot access it. VPNs come in handy during such times. It is a key to unblocking WhatsApp in blocked countries.

A VPN encrypts your internet traffic and routes it to another server located elsewhere. So, you can access WhatsApp in a country where the app is blocked by using a VPN.

VPN is like an untraceable secret tunnel or path to access restricted content in your country. All you have to do is download a reliable VPN, connect to a country where it is not restricted and use WhatsApp freely.

VPN is the best way, maybe the only way, to unblock WhatsApp in blocked countries.

How To Unblock WhatsApp With A VPN: A Step-Wise Guide

Here’s how you can use a VPN to unblock WhatsApp in a step-by-step guide:

Take a look at the best VPNs to get started.

Once signed up for the VPN, head to App or Play Store and downloaded the app. All standard providers have a mobile app.

The VPN will connect you to a fitting server. Connecting to the local servers will help you access WhatsApp at offices and schools.

But if you want to access WhatsApp in a banned country, find the list of locations provided in the app. Then, pick a server from another country.

After connecting to the server of another location, you have unblocked WhatsApp and can freely use all of its features.

What VPN Is Best To Unblock WhatsApp?

Of course, we would want to use the best VPNs to unblock WhatsApp and use all of its features freely and safely. So we have put forward a list of the best VPNs for WhatsApp based on strong encryption, DNS leak protection, no usage logs, available mobile apps, etc.

ExpressVPN has over 140 locations and over 15,00 servers, which can provide more speed and less lag.

NordVPN helps you get past any geographical restrictions.

PrivateVPN has a user-friendly interface and comes at an affordable price.

IPVanish is an easy-to-use, reliable, and affordable option that is effective and can relieve blocks.

Surfshark is also a good alternative with no connection limit, fast speed, and safe services.

Is It Illegal To Use VPN To Unblock WhatsApp?

No, it isn’t illegal to unblock WhatsApp using a VPN. But one thing that you should keep in mind is that you are using VPN in places where VPN is legal.

WhatsApp usually has no problem with the source you use to access the app. So, there is no trouble at that end.

However, if a country that has blocked WhatsApp has also blocked VPNs, that is where you could be at risk.

I suggest you check the status quo of both WhatsApp and VPN services before you get into trouble.

Can I Use Free VPN For WhatsApp?

There are various free VPNs in the market, but the question arises of how safe are they? In addition, free VPNs may make money by harvesting user data and selling it to other parties.

Likewise, free VPNs may not have a wide range of server options and may lag from time to time. Hence, we do not recommend using free VPNs for WhatsApp or other restricted apps.

Why Is WhatsApp Blocked Even After VPN Connection?

There are a few reasons that could happen.

In this way, many countries that believe in open and free communications are against the end-to-end encryption feature of WhatsApp. In such scenarios, you may be deprived of using various VoIP and other messaging apps, including WhatsApp.

VPN can be a rescue, as it can help unblock WhatsApp in blocked countries. If you use a reputable VPN, you can access it. All apps are blocked in your country or the country you are traveling to.

VPNs have helped lift restrictions on many apps and sites, but it isn’t without their risks. So you should be aware and clear when you use VPNs to unblock apps.