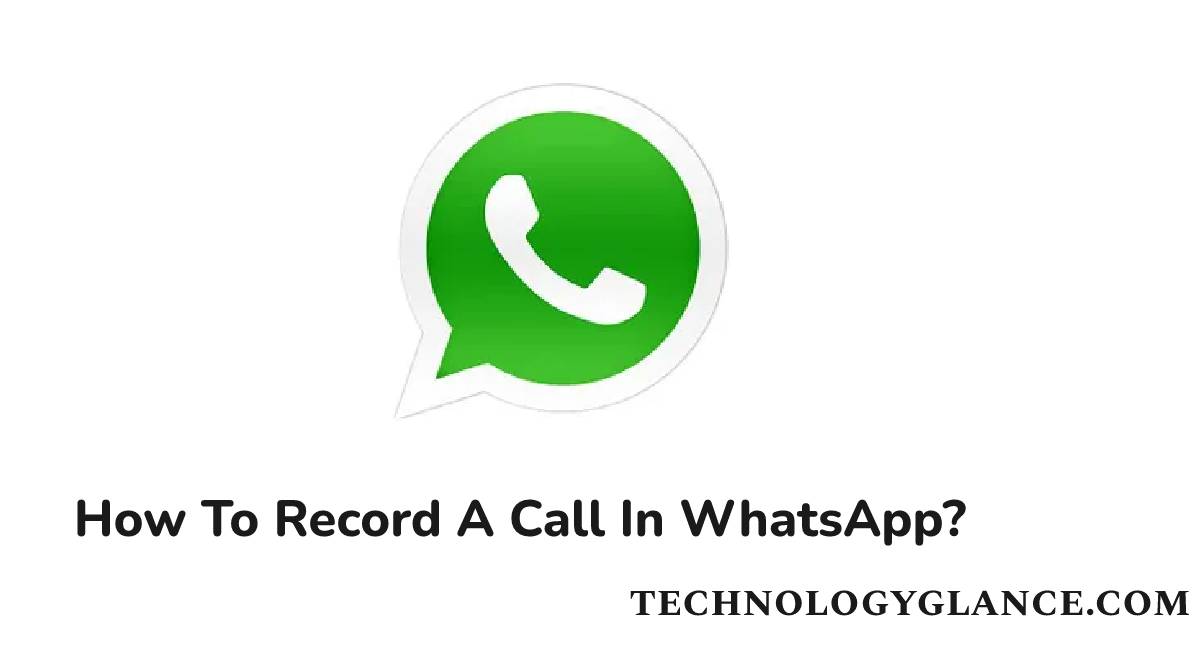 Have you ever desired to record a call on WhatsApp to preserve memories with your friends and family or for some security issues? Though WhatsApp offers a range of facilities, recording a call is not an inbuilt feature of the app. But you don’t have to worry; we have found the way out.

Generally, WhatsApp does not natively allow recording voice as well as video calls. But you can record a call on WhatsApp either by

Let’s dive into the details and get to know how to record a call on WhatsApp.

Can I Record A Call On WhatsApp?

The calls can be recorded using third-party applications easily available in the Play Store or AppStore. Many Android, as well as the latest versions of the iPhones, have the feature to record a call on WhatsApp through the use of the mobile inbuilt option.

Being a WhatsApp user for years, I have always appreciated the user-friendly features of the app. Moreover, WhatsApp is an intelligible messaging app that allows voice calls and video calls conveniently, free of charge: once you have access to the internet.

Maybe due to the users’ security issues or privacy concerns, WhatsApp does not have features to record a call. Explicitly WhatsApp is greatly concerned with the privacy of its users. But you can use a screen recorder or call recorder from a third-party application to record a call on WhatsApp.

But before recording a call, remember to ask for the consent of the other people involved in the call. Many countries don’t consider it a legal act. So, beware of the regulations of the country before recording your calls, especially personal ones.

How To Record A Call On WhatsApp (Android)

Androids offer a wide range of apps that are easily available in the Play Store for recording WhatsApp voice as well as video calls. Some apps have all cost-free features, while some may charge to enable the premium features of the apps.

Android smartphones, nowadays, have inbuilt software to record calls without the use of any third-party apps. This in-built software can even be used to record a call on WhatsApp, i.e., voice as well as video calls.

How To Record A Call In WhatsApp Using Inbuilt Features (Android)

Some of the third-party apps work perfectly fine, but none of the apps is an all-in-one type. They come with ads, and some show poor and slow performance. Thus I prefer using the in-built mobile feature for Android smartphones.

All smartphones, the latest versions, have the screen and voice recording software incorporated by the developer. So you can record WhatsApp videos as well as voice calls without having to download any external applications.

Below is a short overview of how the inbuilt feature helps to record a call in WhatsApp on an Android device:

How To Record Sound While Using Screen Recorder

Sometimes the inbuilt screen recorder in your Android, as well as iOS only records the video without the sound. You may record a session of your call and later realize that the sound is missing. Usually, most screen recorders have microphones disabled in the default settings.

In this case, you need to enable the microphone usage option. Henceforth you can record a call on WhatsApp with both video and audio.
To perform this task, follow the steps mentioned below:

How To Find In-built Screen Recorder In Your Smartphone

Perform simple navigation for the screen recorder as follows:

If no app or software for recording is present, then opt for recording with the support of third-party apps.
If you find a screen recorder in your phone, opt to use it instead of a third-party app. As the inbuilt recorders are easy to use, ad-free, and, most importantly, do not require permission from your device to access.

Due to the lack of WhatsApp’s call recording features, many third-party apps are built to make call recording convenient for users. A variety of free applications are available in the Play store, which can be downloaded; data charges are applicable.

These applications are specially designed to record a phone’s screen but can be used to record a call on WhatsApp. It has similar functions to the inbuilt recording feature available in the latest versions of smartphones.

Here’s how to record a call in WhatsApp (video or voice call) on Android devices:

Apps Are Available For Call Recording On Android

I prefer Call Recorder- Cube ACR, as it is free and automatic. It works with WhatsApp and a variety of apps like Instagram, Viber, Zoom, Messenger, and many more. The best part of the app is that Silent Mode can be enabled, which will hide the recording widget and the app from the screen.

It is another excellent alternative for recording calls on WhatsApp. Coupled with the simple and elegant interface, its features are fully functional in free versions. But, it requires a subscription to remove ads.

This app, too, is one of the most downloaded apps in PlayStore. It offers features like now watermarks, unlimited recording time, and no rooting needed to use it. At the same time, this app has bugs in some conditions.

Note: Some apps may be banned in your region and may not be available in Play Store. Also, many apps are supported only by the latest versions of Android. So, before choosing the recording app, be aware of its compatibility.

How To Record A Call In WhatsApp (iOS)

Unlike Android smartphones, iOS does not allow a third party to have access to its microphone and camera. Thus a third-party app is useless for recording calls in the case of iPhone users.

The most simple and basic way of recording a WhatsApp voice or video call is to use the iPhone’s in-built screen recording feature.
Follow simple, hassle-free steps to record WhatsApp calls on your iOS:

Where To Find The Recorded WhatsApp Audio And Video Calls

Once you have finished recording, you may be puzzled while trying to find the recorded file. As soon as you tap the stop icon of your recorder, the file automatically saves on the device.

If you have recorded the WhatsApp call using the device’s in-built option, to find the saved file, go to Photos or Gallery on your device (Android or iPhone). You will find the screen recording video in the gallery.

If you have used a third-party app to record the WhatsApp call, as in the case of Android, go to the installed app. You will find the recorded file once you open the App.

How To Record A Call In WhatsApp On PC?

WhatsApp does not feature a call recording option, even in the laptop app. But it is possible to record the call in WhatsApp by downloading a screen recorder for a PC.

Out of many desktop apps, the top-rated ones are iTop Screen Recorder and Bandicam Screen Recorder. Let’s move straight to the point of how to record a WhatsApp call using a screen recorder on your PC.

Select the Full-Screen option in the app. Also, select both Audio and Video settings in the options available in the App.

Once you have installed the app, open WhatsApp call and press F9 or F12 on your keyboard or the REC button in the app window. Wait for a few seconds until the screen recording starts.

In the end, again press F9 or F12 to stop the recording.

Step 5: View And Edit The Recording

Go to the app and double-click to open it. Under My Creations or Videos, you will find your screen recording. You can view as well as edit the recording.

Yes, you can record WhatsApp calls even without a third-party app or inbuilt option. Simply put the call on speaker and maximize the volume. Record the call from another device by placing the speaker of the calling device near the microphone of another device. It is a grueling task and may not result in clear sound quality. Only voice calls can be recorded in this process.

Can I Record A Call In WhatsApp Secretly?

But be aware of the rules and regulations of the region you are living in. Recording a private call is against the law in many countries around the world. So do respect the privacy of the other people directly or indirectly involved in the call.

Is Call Recording free On WhatsApp?

Yes, call recording is free in most cases. If you are using an inbuilt option on your device to record the call, then even data charges are not applicable.

If you are downloading a third-party app, the data charges are applicable, but the app is free to use. Some apps may charge money if you want to get access to premium features.

How To Record A Call Automatically In WhatsApp?

Does WhatsApp Record Your Calls?

No, WhatsApp or any third party (unless you give permission) is not allowed to record your WhatsApp calls. WhatsApp provides an excellent end-to-end encryption feature. This feature forbids even WhatsApp from getting access to your calls and messages. Only communicating users will have the right to access the information.

WhatsApp calls can be recorded following any of the convenient methods as described above. Just remember, before recording, it’s always a good option to ask for permission from other communicating users.

Before giving access to a third-party app, do be aware of the risks. The third-party apps will record your call at your end, so stay alert while using such apps which have access to other apps. Though WhatsApp is end-to-end encrypted, you may be recorded at the other end using a recorder.